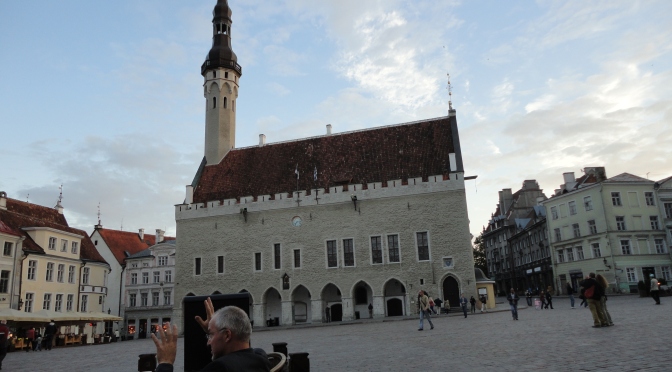 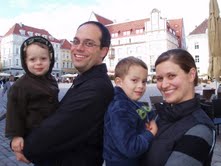 reality! During our three months in Tallinn, Estonia, we were privileged to serve with Missionaries Nate & Ingunn Turner and their two sons. It was truly an amazing start to this new phase of our ministry.

Upon our arrival in mid September, we jumped right into acquainting ourselves with the customs and cultures of Eastern Europe, as well as learning to use public transportation and getting our bearings on navigating our way around a city where many did not speak English. Luckily, the language barrier was not too big of an obstacle as most young people under the age of 30 were quite proficient with the English language as it is the preferred international business language.

Old Town Tallinn was simply breathtaking! On our first evening in town, Missionary Turner took us into the City Center for dinner (trying to 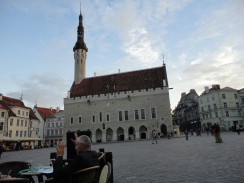 help us adjust to the eight-hour time difference), where we were just simply mesmerized at the living history book we had stepped into. We were surrounded by buildings approaching 1,000 years old, and on one of the pillars of the old Town Hall, there is still a set of shackles hanging there!

The beauty of the city is only surpassed by the warmth of the Estonian residents. Now, although many do not appear that way at first, once they have developed a relationship, they are wonderful people.

We worked alongside the Turners, as well as

two young ladies who were also there assisting the work. We learned a great deal about Prayer Walks. We also began holding a House Church Bible Study in our apartment. We  offered assistance by ministering and teaching in the main church as needed. Outreach efforts were also a part of our responsibilities.

Upon our arrival in Estonia, the weather was fall like, with temperatures in the upper 50’s during the day. It was fun to watch as we walked down the streets in our shirt sleeves and Nannette in her 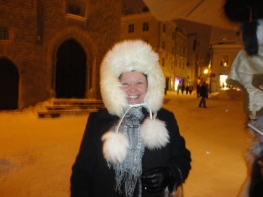 sandals. The nationals passed us bundled in the heavy winter coats, scarves and boots! By the time we left in early December, this type of clothing was necessary as we experienced a snowstorm that lasted several days and dumped over 24 inches of snow! It was a Winter Wonderland!

Possibly the most impacting experience of our time in Tallinn was our encounter with Nikolai. He was one of the security guards in the entryway of our apartment complex. Nikolai was Russian and one evening as we were coming in from our journeys of the day, Nikolai came bursting out of his little glass enclosed cubicle and began chattering away in Russian to us. We were so despondent that we could not communicate with him. Thankfully, a few moments later, a young lady entered the building and we immediately asked her if she could translate for us. She reluctantly agreed, and quickly Nikolai began chattering again! After some coaxing, the young lady

expressed to us that he had told her that for years he has sat in that cubicle and watched people come and go, but none ever acknowledged his existence unless they had a problem. Yet he said (as he pointed toward us) that ever since these two have arrived, there has never been a time when they walked through the corridor that they failed to wave and smile to me! “These people are my friends!” he exclaimed, and then proceeded to kiss my wife on both cheeks, and then, to my surprise…he did the same with me!

A few days later, we printed off a copy of the picture that you see here and put it in a little frame for him. We took it down to him and when he opened it, tears immediately began to trickle from his eyes. How quickly we forget the value of treating people with dignity and respect as God places them in our pathway. This can go such a long way in reaching the lost and hurting with the Gospel.

Our first three months in Tallinn were invaluable in our preparation and training for the future of Faith Journey! As future phases of our Journey became reality, we draw upon these initial experiences of Tallinn! This city and country will always hold a special place in our hearts!